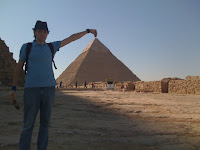 I went to see the pyramids with a young family in the branch. It was great fun. It certainly makes you feel small and inconsequential to be dwarfed by these structures. Despite a recent change in policy, the peddlers were still hard to avoid. The people I did talk to there were generally dishonorable. The peddlers claimed to agree on one price and then they would try to wrestle you out of more money. The security guards are all a joke - each of them conniving at us taking pictures or crossing cordons, while clearly expecting remuneration. It makes me feel very uncomfortable. At the risk of being just another stingy American, I just treat them all very brusquely and brush them off like pesky flies. What they don't realize is if they were more trustworthy they would better merit my patronage and my gratuity.

I've tagged some locations on a Google Map for you all to see. You can get a sense of where things are compared to where I live.

As always, photos of things are posted for your viewing pleasure.
Posted by David at 2:14 AM 5 comments:

This is very exciting for me. Honestly, I was never a fan of the original Star Trek. It wasn't until The Next Generation that Gene Roddenberry's creation became important to me. This trailer has me hooked: (RSS Feed readers will need to see this in their normal browser window.)

The cast is full of interesting choices.

Simon Pegg is Scotty. I wonder if he'll be toning down his comedic characteristics for this role. I really hope not. I don't remember if old Scotty was funny or not, but Simon Pegg seems to me like a step up.

Leonard Nimoy is being replaced by Zack Quinto, from Heroes. It seems nearly impossible to replace Nimoy. He was the shining light from the original series. Luckily, Leonard Nimoy will be making an appearance in this movie as old Spock at some point. I only know that because he is on IMDb's cast list. Hopefully Quinto can avoid acting anything like Sylar in this movie. If I see even a glimmer of Sylar's cipher-like character in Quinto's eyes, I will be upset.

Some of the casting is amusing to me. John Cho as Sulu and Anton Yelchin as Chekov seem to be a result of the casting director picking the top Asian and Russian young talent in Hollywood. (Which is probably what happened for the original casting of the series in the 1960s.) Luckily, Anton Yelchin is a fine young actor. I look forward to him more than the others.

I really don't know anything about Chris Pine (Kirk) or Karl Urban (McCoy) or Zoe Saldana (Uhura). I'm trusting that Abrams chose these people wisely. I'm sure that Kurtzman and Orci know what they are doing. They seem to know a thing or two about character development and story telling... but I wonder what they can do with Kirk's character. Shatner really did a number on James T. Kirk. I don't even know where the character ends and the actor begins anymore. So, can these writers be the defibrillator to this acute myocardial infarction? CLEAR! . . . CLEAR!

Kirk's character aside, I know I'll like this movie. The trailer made me smile widely as I rubbed my hand together in anticipation.

To infinity and beyond! Wait... no. I mean, to boldly go where no man has gone before!
Posted by David at 2:20 AM 5 comments: 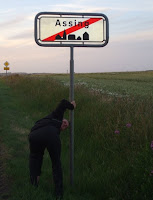 Also featured in the picture is the European street signage that I grew to love while in Spain. They have signs that indicate the municipal boundaries on the highway (just like we [Americans] do), and when you see a sign with a line through it, this means you are leaving the city limits. It's a very satisfying feeling. It's almost as if you are crossing the city off your list on the road to your destination.
Posted by David at 1:11 AM 2 comments:

I received a handful of vituperative emails regarding my opposition of Proposition 8. I feel obliged to say something about the matter.

Primarily, I wish the government would stay far away from defining marriage. It seems like such a complicated word these days. Every religion has a new way of defining the word. (I'll use the Mormons as an example because of my familiarity with the religion.) A Mormon marriage is more commonly referred to as a sealing and is far more intricate and complex than a simple civil union. Two temple-worthy individuals are sealed for time and all eternity. It is a beautiful thing. No matter how wonderful it is, I don't want the government to declare LDS marriage as the only definition. That messes with other people. Generally, the government getting involved, and narrowly defining anything puts limits on other people. So if there must be an official definition in the constitution, it should be the broadest possible definition as to include the largest variety of Americans. Alas, limited government finds a fair-weather friend in the right-wing.

Let's just say, for some reason, the government felt that it was important to get involved in how we define baptism. (A notion almost as ridiculous as them defining marriage.) They would probably include all sorts of baptisms: submersion, sprinkling, misting, etc. Would the Mormons be outraged if one of the versions of baptism included in the definition had some cleric using Dr Pepper instead of water? I'm sure nobody would care, because nobody is scared of Dr Pepper affecting their kids. (Scratch that. Few people.) Also because the state's definition wouldn't change a thing about how Catholics, Mormons, and Protestants baptize. It would only let a few more people into the party. And it's always good when people bring Dr Pepper to a party.

All other discussions that bounce behind this issue, like Dr Pepper cans strung behind a Just Married car, should not really be part of this discussion. Gay adoption, gay civil rights, teaching gay marriage in school, your kids' sexual development... These things may be important to discuss and resolve, but in many ways these are inevitable and unaffected by the definition of marriage.

I'm not trying to convince anybody of anything. I know it is the 11th hour and I don't intend to affect anybody's vote. I'm mainly responding to people who have sent vitriol my way. Some people who support Prop 8 are bigots. Look up the word. Many others are not bigots. I know people who are sympathetic with the gays but support the proposition because of their faith in religious leaders. I know gay people who plan on supporting the measure for this reason. If my faith were stronger, maybe the instruction of religious leaders would have the weight to overpower what I feel is correct. That's a cognitive dissonance that I have to deal with.

Went to the movies last night. The local theater is a few blocks away. Most of the movies that they show are local productions. Despite my love for cinema, I can't bring myself to see these. Maybe at some point I'll buckle just for the experience of it. . . but that will be when I run out of other things to do. I hesitate with reason. If their movies are anything like their television shows, then I know there is nothing to enjoy. I don't think I could handle the poor production values, amateur acting, etc. Luckily, the cinema shows a handful of American productions. Since I've been here, I've seen posters for The Dark Knight, Righteous Kill, High School Musical 3(seriously, what the hell?), Mirrors, and Tropic Thunder. I asked the usher, and he said that Quantum of Solace comes out on the 4th here. Curiously, my information indicates that it will be the 5th. That's still more than a week before you all get to see it.

We had a few hours before the movie started and so we walked around the mall vicinity. We made a few important discoveries.
We saw Body of Lies - the fourth film collaboration of Ridley Scott and Russel Crowe. Between the two of them lies a body of work that makes it onto top 50 listsWhat a fantastic movie! The writing was quick and smart (as expected from William Monahan) and the cinematography was what we have come to expect from modern, fast-paced action movies (thanks to DP Alexander Witt). The cast was perfect. I will now watch anything that Leonardo DiCaprio does. He is immediately believable in his roles. The local talent was also impressive - those with better eyes than my own may recognize actors from Paradise Now, The Syrian Bride, Munich, etc. The story was strong - not too complicated (Syriana), not too preachy(Lions for Lambs), not too vacuous(The Kingdom), but juuuust right. Some have aptly compared this movie to Spy Game. I think that's a fair comparision.

I feel like there is something to say about violence here. Movies represent violence in many ways. Lots of movie makers increase the exposure to bloodshed, dismemberment, etc. Sometimes they put the act of violence off screen and we then see a shadow of the act, or we see a blood splatter, or we just hear it and our mind fills in the rest. All of these techniques have their uses. Over the years, gunshots in film have varied in their decibel levels. I don't know any official data on the subject, but it seems to me that the volume of the gunshots in a movie changes how the movie affects me. The guns from a Woody Allen farce sound like cap-guns, for a less jolted audience experience. Body Of Lies has some intense violence. The depictions would be conisidered violent even if we were watching a Cecil B. DeMille movie, but this violence came with some volume. The increased volume makes the whole experience much more viscerally jarring. I'm a pacifist, and I don't usually like movies that are obsessively violent. This movie is not that. It is tasteful and appropriate for the story that is being told. Watch the movie, tell me what you think.

The overall Egyptian movie experience was pleasant. Except for a slight focus issue, the audio/video was quality. The seats were comfortable and the audience was quiet and respectful. The ushers were cool too... they actually wore tuxedos and they ushered people in and out with dim flashlights. The intermission in the middle of the movie was a shock. It wasn't very gracefully spliced. I suppose it's impossible to expect Egyptians to go a whole two hours without smoking.
Posted by David at 1:56 AM 1 comment: