A friend asked me: Why is edward norton playing the hulk? isn't this weird? they already did the movie just 3 years ago and its not really a role I think he would jump at the chance to play.

My response: It seems like the last couple of years have shown us several examples of how to make comic book adaptations really good. General collective thought seems to suggest that the The Hulk (2003) was not good. (It certainly doesn't have any of those "gritty" qualities that movies like Batman Begins, Superman Returns, V for Vendetta, and Sin City possess. But then, you wouldn't expect grit from the man who directed Brokeback Mountain, Lust, Caution, and Crouching Tiger Hidden Dragon.)

Still, the big question is: Why would Edward Norton stoop to this kind of a low? My sense is that he must be a fan of the comics. Also, given the appropriate depth and talent of the filmmakers, they can make these kinds of characters transcend the world of comics. I'm not really trying to get in to the deep side of things, but I know Superman, for example, is an adaption of sorts of the studies of Nietzsche and the Übermensch. It remains to be seen what there is to be examined in the upcoming Hulk movie... I'm guessing there are themes of rage, self-inflicted fate, fear, etc. The good news is that Edward Norton wrote the screenplay. That's almost all I need to know to expect quality. He's not stooping to any lower level, he's bringing the story back and lifting it to his level. This is a snippet I found where Norton responds to your question...
[Norton] was initially skeptical about taking the role, telling Total Film: "When the phone rings and someone says, 'Hey, would you be interested in the big green guy?' There's that part of all of us that doesn't want to look like an idiot. There's the wince factor or the defensive part of you that recoils at what the bad version of what that would be. And I did that, basically. I said 'no' to it a couple of times."
He insisted that the new movie will bear no relation to the 2003 version starring Eric Bana, saying: "I think like Chris Nolan and those guys did with Batman, we just said: 'We're going to start completely with our own version of this myth or saga.'"

So, I hope this answers some of your questions. We'll see how the movie turns out. It could end up being complete nonsense. (See The Italian Job) I'm crossing my fingers, though. I tend to be optimistic about Edward Norton jobs, and the trailer looks promising.

Be careful how high of a standard it is to which you hold him. Remember, he's just a man of flesh and blood... He's not John Cusack. 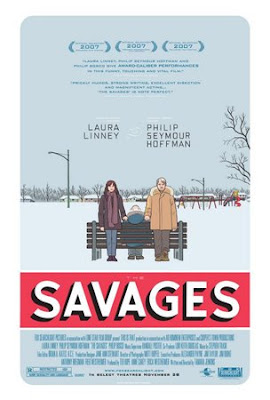 I saw The Savages with good friends. [Directed by Tamara Jenkins. Starring Laura Linney and Philip Seymour Hoffman. Nominated for 2 Oscars: Best Actress - Laura Linney, Original Screenplay - Tamara Jenkins] John and Wendy Savage bring their father to New York to put him in a nursing home. John is a depressed Bertolt Brecht scholar and Wendy is a depressed out-of-work playwright. Like bare scars from their shabby upbringing, they are unable to have healthy relationships. Each is plagued with emotional and physical trauma for which they self-diagnose and self-medicate. The task of caring for their ailing father seems too much for this pair to manage.

The subject matter here seems upsetting and negative. And in the wrong hands, this certainly could be a dismal mess and/or an irreverent treatment of sensitive events. Mrs. Jenkins' and her magnificent actors manage to create charm and humor in moments of discomfort, anxiety, and sadness. PSH plays a softer version of his typical presentation; entertaining as usual. The audience creates a bond with Laura Linney more than anyone. I found myself defending and encouraging her, and then being crushed when she didn't tell the truth, and uneasy whenever she breached propriety. The father character is basically a cypher, and the actor plays his part well.

This is Mrs. Jenkins' second feature length film. I was very impressed by her writing and direction to the point of being surprised. Then I saw that Alexander Payne was one of the executive producers and it all became clear. I've been impressed by everything Mr. Payne has directed over the past ten years.

(The seasoned fans of "The Wire" should also recognize the actor from that show who plays the hit man, Chris Partlow. In this movie he plays a Jamaican-sounding Nigerian nurse. Very nice.)
Posted by David at 12:38 AM 4 comments: